Many of us are quite familiar with...

Chemistry could be monotonous and bland if... 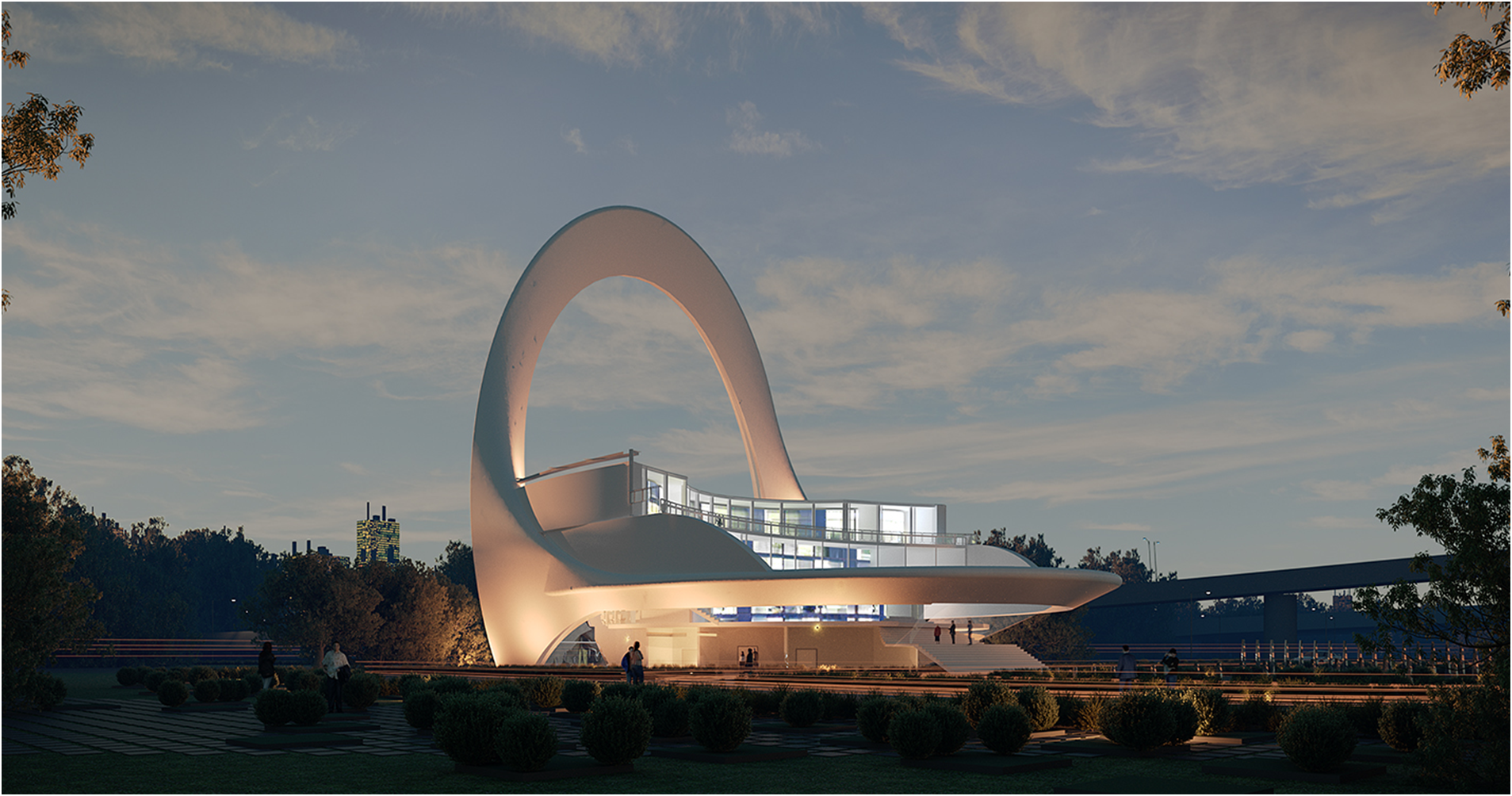 The Saudi architectural consultant INJ Architects designed a unique mosque under the name Al Falak Mosque, which was part of a prestigious architectural competition that gained great momentum in the world of architecture, to design the Bristol Mosque in the United Kingdom.

Al Falak Mosque is one of the innovative and unique architectural designs, especially in the field of mosque design. The design was inspired by modern architecture and the philosophy of architectural quotation of organic elements, and this was the reason for its distinction from other places of worship. Referring to the architectural philosophy of the Falak Mosque, it goes back to a different and brave design under the name of Parametricism, based on the computational design.

The challenge that embodies this design is its difference in shape from the rest of the other mosques, whose design is traditional and customary. It has a curved and sculptural shape, making a statement to both visitors and worshipers. The long arch represents the minaret with a clear focal point; It is therefore considered a unique place of worship with a contemporary approach to a multicultural community and a unique landmark for the years to come. It also constitutes a distinctive architectural character that reflects the modernity and adaptation of Islam to any environment in different countries and between multiple cultures.

The visual form of the building is carefully chosen, as it is in the form of a ship with deep meaning in Islam. This distinctive shape indicates a sign of the release of faith and a safe haven, and the beginning of a spiritual journey for all its worshipers and even the visitors to feel complete comfort and stillness.

Although we do not claim that the design of Al Falak Mosque fully met all the guidelines that were described for the design as some additional information was provided very late, the design met at least 80% of what was expected and could be developed further.

In addition, the design is located in a prominent place where the building can be seen from all angles with ease and clarity, and can be visually navigated through spatial communication. The visitor must be able to locate their arrival from afar. Site access is retained on D’Urton Lane, but the route to the plateau is modified.

Although the location of the building footprint is placed differently from the location in the suggestive floor plan, we believe that this method is better for the following reasons:

In terms of the area of ​​Al-Falak Mosque, its area is 2382 square meters.

At first, the design consisted of only three floors, but we added another floor to increase the space and to enable the mosque to accommodate more worshipers and visitors. As you can see in the architectural plan of the mosque design, the two upper floors appear horizontal, while the minaret (represented by the long arch) appears in a curved form.

Moving to the ground floor, it covers an area of ​​862 square meters, which is also the main prayer hall. This floor has a large curtain wall that is curved to represent the mihrab that ensures maximum natural light from outside. It can also hold up to 410 prayer mats. A subsidiary entrance to the main prayer hall can also be found on the ground floor.

The first floor is the lobby, as it has a direct entrance from the inner street of the mosque, and its area is 377 square meters. The landing site is covered by the overhanging shape of the building. Visitors are also welcomed in a large atrium with a skylight covered by a space frame. On this floor there are several services such as reception, ablution area, dressing room, and others.

The second floor is a prayer hall for women with their own ablution area and a childcare facility. The area of ​​this floor is 392 square meters. It is placed above the main prayer hall with a concave glass wall in order to provide clear views of it.

The third floor includes the library, meeting room and community room, and it has an area of ​​753 square meters.

All spaces are flexible – the latest mosque designs

The vertical flows are found on the perimeter of the building so that the space of the main prayer hall can be kept empty. To facilitate the transportation of visitors and worshipers, there is a staircase going down to the main prayer hall on the right, and another to the women’s prayer hall on the left, in addition to the elevators available towards the rear left. Stairs are set along the buildings’ curvilinear geometry, and have unique zigzag shapes with dim light streaming on the curved wall. The structure of the building is white concrete. The exterior cladding material is GRC (Glass Fiber Reinforced Concrete), which is widely used to form exterior cladding panels with complex geometry. It can also be shaped into any shape and size. Another benefit of the GRC plate is its light weight and durability for over a hundred years without losing tensile or flexural strength.

Landscape around the Falak Mosque

In terms of landscaping, it can be identified as having two parts, softscape and hardscape.

The main element of the hardscape is the plaza, which can be found directly where it is opposite the entrance to the building. It has a semi-oval shape with a pavement pattern, surrounded by torsional concrete monoliths of varying heights. These monoliths have a special meaning, as they have different angles at the base, but in the upper part they all turn southeast; That is, in the direction of Mecca. The different heights and angles mean that people from different walks of life come together and join forces for good. The monoliths themselves are also sundials; They give an indication of the hours of the day through the effect of sunlight on them.

The other element of softscape is trees that surround the perimeter of the sites as a barrier to wind and noise. Trees on the island in the parking lot provide, where possible, shading for cars. Interior streets are designed in a straight line for engineering purposes; It is a one-way path with a main loop that allows return to the mosque building. Parking is provided as specified with a minimum of 140 places, in harmony with the landscaping scheme. There is also a parking space for bicycles.

As some say the building is a work of art, this building could not be otherwise. The interior design of the building should be simple, white and not ornate, it is the best way to reflect its original form. Indirect lighting can be used to wash out curved walls and maximize natural sunlight through the space frame ceiling and glass elements. Plus there are some extra chairs like twisted glass chairs that match the patio stones and custom made to fit the space.

The design of mosques in a modern way represents the new architectural development and modern Islamic design. Although we were not lucky to win a prize in this architectural competition, but we are convinced that the phase that will enter the field of mosque design is the share of such designs. How can you reduce friction in the time of epidemics and make the crowds of worshipers safe. This is, of course, what we aspire to, because the Islamic architecture of mosques did not provide for decoration.

And if we return to the origin of Islamic architecture, according to what Ibrahim Joharji says, its origin to the Kaaba is simplicity and true proportion, and this is what we want to reach. All the existing decorations are complementary elements and have nothing to do with the subject. As the first mosques in Islam were made of clay and palm fronds, without exaggerating the outward appearance. But with the development of science and Islamic arts, we have successfully managed to go extravagantly with decorations. We believe that building mosques does not stipulate two basic conditions: cleanliness and facing the direction of the qiblah. So this is what we should focus on and be creative in. Imagine that this giant mihrab makes you know the direction of the qiblah from anywhere around the tidal; In this, it is a consolidation of Islamic values ​​and an ease in explaining the Islamic purposes of the mosque and the place of worship. That is, it is not necessary to hear the call to prayer until you know the time of the call to prayer. You can look and know the position of the qiblah with ease.

WHY DESERT SAFARI IS SO FAMOUS

TIPS TO GROW YOUR ACCOUNTING FIRM IN DUBAI

Check out other tags:

WHY DESERT SAFARI IS SO FAMOUS

TIPS TO GROW YOUR ACCOUNTING FIRM IN DUBAI